Arctic Amplification means more energy in the Arctic. It’s warmer there now so there is more energy there. The “amplification” part of Arctic Amplification refers to how the Arctic, which is warming at twice or more the rate of the rest of the world, reacts with the rest of world. The global air currents that flow on the jet stream becomes energized if there is a greater difference in the temperature in the lower latitudes than in the higher latitudes. 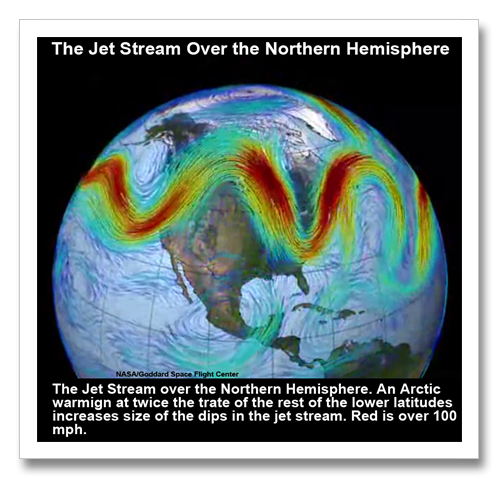 This makes the jet stream have bigger loops that extend farther south. These larger loops spawn larger storms. They also slow down in their west/east transition and even sometimes stall completely. this is what caused Superstorm Sandy top make that unprecedented left turn. A huge high pressure system had parked itself over Greenland, and dug in, or got stronger. (See these two posts about how Superstorm Sandy was enhanced by Arctic Amplification and a record warm Atlantic ocean: https://climatediscovery.org/insandity/  https://climatediscovery.org/superstorm-sandy-are-we-being-taken-for-fools/).

The researchers that discovered this relationship have had a challenge in the literature, a challenge that has it’s valid moments but is radically wrong. They tell us there is no relationship in a standard 30-year meteorological time frame. and they are correct. this phenomena first emerged from the chaos of the data about ten or fifteen years ago. Figure two of Barnes 2013 even shows this fairly robustly. But standard 30-year weather statistics from the 20th century, before our climate changed, tell us the trend is still not statistically valid.

This is the trouble with abrupt climate change. It’s valid on shorter time scales but not on the  meteorological norm. It matters not to Barnes that most abrupt climate changes happen in less than thirty years—23 times, 7 to 14 degrees global average temperature change, up to 25 degrees in the Arctic.  in a couple of decades to as little as a few years.

The real deal with climate change is absolutely not associated with 30-year averages. By the time 30 years has elapsed we could be 14 degrees warmer than today. that would be over seven times more change than we have seen in about the last 40 years. you just can’t measure abrupt climate change with our old stable climate tools. it makes no sense and is trouble waiting to happen.

The rest of what Francis and Vavrus say, that is also backed up by the Barnes paper only for less than 30-years, is that the Arctic Amplification is the most pronounced in the fall and early winter. Which makes an enormous amount of sense. The energy is the greatest in the Arctic before complete ice over. As lower ice levels extend farther into the fall, more of the warm ocean is open to the furious Arctic winds. More of that energy gets picked up into the atmosphere and is available to enhance the strength of storm systems.

We cannot afford to wait 30 years to find out. this is what Barnes wants to do. It’s a classic rouse set forward by those who would rather we believe climate change not exist.