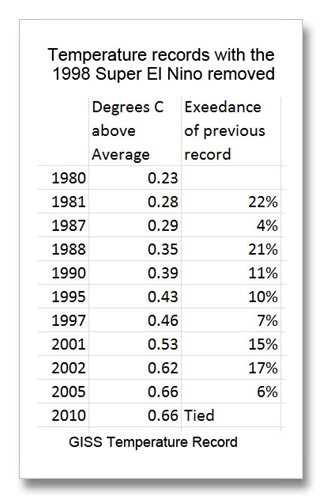 This is an easy sit-down-and-shut-up explanation for the global warming has stopped myth.  In 1998 we had an extraordinary Super El Nino unsurpassed in the modern temperature record that broke the the previous record by 33 percent. This record was almost twice the previous largest jump since climate change impacts began (1981, 21%).

This massive never-before-seen record supposedly marks the first year that “Global Warming Stopped.” And I say it’s easy, but I need to work through a few things to get to the “easy” part.

Statistically, this jump is a fluke, or a statistical anomaly. In normal statistics this data point would be thrown out because it exceeds the boundaries of a “normal data set.” But because we aren’t statisticians, this is a little difficult to understand, and it’s a little hard to simply throw out a year.

Another way to “see” how trends work, and to see how our temperature really has not stopped warming is to be able to see through the chaos. There is a lot of year-to-year variability that is natural in global temperature. Smoothing out the chaos using a moving average works well. This is what meteorologist at the National Weather Service do to give us our “normal” daily temperatures. They use a 30-year filter, or a 30-year average to “smooth” out the chaos. But this is a bit complicated too, so let’s go back to the statistical fluke.

Throwing out the fluke is what scientists do, so let’s throw it out. They through out data for a number of reasons and when I am finished, it will be obvious that it is ok to throw out 1998. One of the reasons they throw out data is because of errors. If data is collected wrong, or there is a malfunction or maybe the thermometer in this case needs calibrated, or something happened that fundamentally changed the data set, the data is no longer valid. It does not conform to the same set of criteria that the rest of the data follows.

Say some winter temps were mixed in  to the summer temperature data for a summertime analysis of water temps in Corpus Christi Bay. it wouldn’t make sense seeing those cold 50 and 60 degree water temps mixed in with all those 80s, so the data would be thrown out. There are mathematic rules to follow to tell us if the data is valid or not—if it belongs, if it makes sense. If it does not belong there is something wrong with it. We may not know what that something is, but because the mathematic rules tell us it is invalid, we cannot use it in our data analysis or it ruins everything.

This huge jump in temperature in 19989 is just such a case. It does not belong because it is a product of a different data set—the data that comes from our “new” climate. But now that we have made this leap, we have another problem. We can’t “prove” that it is from our new climate yet because we don’t have enough additional data. So what do we do?

Let’s go back to throwing out the fluke. Another way to tell if trend is valid is to remove data points and see what happens to the rest of the data. When we do this the changes from one record to the next seem to become more ordered. The new records only break the old records by about the same amount as the biggest record breaking leap in the lot. There are no more “super” data points to mess things up. There are mathematical rules for this too, but they are really complicated (for me at least).

So now we have thrown out 1998 because it messed up the normal trend. It created this super spike in global temperature that was not normal to the rest of the record. People who are not familiar with statistics see this huge peak as the beginning of the time that “Global Warming Stopped” when in reality it’s just a fluke. Global warming continued on.

Now for reality: Carbon dioxide and greenhouse gas physics are very well understood and very much agreed upon. short term climate changes of less than thirty years however are not. there is still a lot of chaos that we are struggling to explain, or that our current explanations for are not yet perfected.

Examples of this abound in the reporting on this website.  If only we could convince the deniers that greenhouse gas physics rules the roost and short-term climate changes still have some magic in them, then we could carry on with more important things like treating climate pollution before we reached a significant irreversible tipping point, or worse.